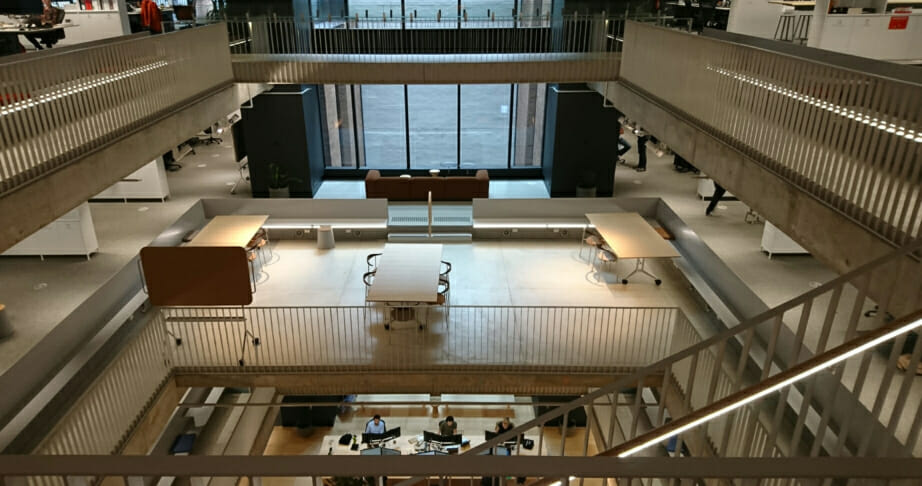 It was a keen group from TSA that gathered early one Friday morning for a guided tour of one of the company’s most recent projects. We each knew of TSA’s involvement in the commercial development of Barrack Place and hoped to experience first-hand the unique features of a building specifically designed to promote ‘wellness’.

Barrack Place includes 22,000 square metres of A-Grade office space and retail over 18 levels. The project has been awarded Australia’s first ever WELL Core & Shell Gold Precertification by the International WELL Building Institute. WELL is a performance-based system for measuring, certifying and monitoring features of the built environment that impact human health and wellness.

Dan Jourdan, Project Director and key member of the TSA project team, welcomed our group with characteristic energy, coffee in hand. Dan played an integral role throughout the planning and construction of Barrack Place after assuming team leadership from TSA’s Jodie Drysdale, who successfully led the project’s complex demolition phase.

Dan’s passion was evident as he pointed out elements of the building’s foyer. Natural materials, including bamboo plants and timber finishes, align with the project’s overarching commitment to wellness. Pavers extending into the building’s main entrance are matched to the outside street, creating continuity with the external environment. The concrete ceiling was painstakingly textured and painted to mimic the appearance of woodgrain. According to Dan, this was a Da Vinci-like endeavour that saw one of the on-site workers elevated horizontally for hours with a trowel and paintbrush to achieve the desired effect.

Dan told of the discovery during the project’s demolition phase, that at some point in the past the neighbouring building had encroached over Barrack Place’s designated boundary line by c.150mm. This infringement seemed almost trivial until Dan explained the very real impact to TSA’s client, Investa and the prospective tenants of Barrack Place in terms of lost net lettable area. Undaunted, the TSA project team tackled the challenge of reclaiming this space. False walls were built inside the neighbouring property, requiring the relocation of existing kitchens by 1.5 metres, while a new and permanent boundary wall was constructed to re-establish Barrack Place’s rightful border.

While this undertaking was ultimately successful, it inevitably impacted the project’s anticipated completion date. Determined to deliver this state-of-the-art building in 2018, Investa implemented an accelerated program. Dan spoke proudly of the enormous effort made by the TSA team and project contractors to deliver Barrack Place without incident and within the original timeframe.

The building itself is a combination of old and new, with modern glass towers emerging from a typically older-style red brick podium. According to Dan, the intent for Barrack Place was to retain the industrial feel of its surrounds and create cohesion with neighbouring buildings. Dan pointed out the beautifully intricate brickwork gracing the building’s façade, including ‘corbel’ window reveals. Once typical of Sydney buildings, this style of masonry is now uncommon, and Dan and the TSA team had to procure the services of retired brickies to help achieve the elaborate finish.

Barrack Place acts as a thoroughfare between Clarence and Kent Streets and epitomises Sydney’s growing laneway culture. The ground floor features up-market retailers and healthy food and beverage outlets in keeping with the theme of wellness. Dan explained the deliberate link between the noticeable abundance of coffee outlets and the history of the site, which was originally occupied by Sydney’s Grand Central Coffee Palace from the late 1800s.

We trailed Dan through this bustling thoroughfare to one of the building’s more striking architectural feats – a central void which links the studio levels of Barrack Place and floods internal spaces with natural light. According to Dan, this currently unoccupied space will soon house an upscale bar and restaurant and it was easy to envisage the trendy destination that Barrack Place will inevitably become.

And while Barrack Place has many remarkable features, it may have been the end-of-trip facilities that made the greatest impression on our group. Those lucky enough to work at Barrack Place have access to state-of-the-art amenities specifically designed to promote health, happiness and wellbeing. We proceeded through a secure entrance to a sizeable room filled with bicycle storage racks. These housed both the larger and heavier style of electric bikes as well as the much lighter, carbon fibre models. Attention to detail was evident as Dan pointed out the non-slip flooring specifically designed to accommodate cycling shoe cleats and the painted, smooth finish of the low-level, fireproofed ceiling.

We continued down a flight of stairs to the building’s changing rooms, which according to Dan had been designed to emulate high-end hotel facilities. The female amenities did not disappoint. With full-length mirrors, a combination of pressurised and waterfall style shower heads to choose from, hooks on the back of every door and ample shelving for bags and clothing in each cubicle, it would feel wrong not to use these facilities. The area was spacious, well-lit and finished in a calming combination of natural hues. Perhaps most importantly, there were numerous hair straighteners and blow-dryers available, as well as an entire wall of neatly folded towels.

We then ventured to the only remaining floor of the fully leased, 18-level development which was not yet occupied. As the group exited the lift, we were immediately greeted by a noticeable lack of sound. Despite Barrack Place’s location between two busy Sydney CBD streets, we couldn’t hear a thing – not a horn, siren, or even the familiar roar of braking trucks. To achieve the WELL Core & Shell Precertification at Gold level, Barrack Place adheres to strict decibel restrictions. The group was fascinated to learn that within the Arup tenancy there exists a dedicated soundproof room to test and implement the acoustic measures used to achieve this almost-eerie calm.

As we continued exploring, another defining characteristic of the project became apparent. Each individual was guided by a pool of light, which Dan explained was part of the building’s energy-saving, ‘Organic Response’ lighting system. This system offers intuitive lighting that only activates in occupied spaces. Floor-to-ceiling glass façade panels provided ample natural light and an impressive view, which revealed the distinct corridor linking the project to Sydney’s iconic Martin Place.

Our last stop was one of the occupied spaces of Barrack Place. Arup, who acted as consultant on the project’s base building, has taken up residence across multiple studio levels connected by bridges and internal staircases. This interconnectivity creates a sense of openness, which is further enhanced by the internal void extending across each level. A clear focus on flexible and contemporary work practices is evident, and Arup employees have access to a range of fixed standing and sit-to-stand desks, quiet spaces, social and creative spaces and an external terrace. Continuing the project’s use of innovative technologies, the space features numerous interactive displays allowing users to influence the building’s performance, as well as a low energy, low noise underfloor ventilation system. According to Dan, this system provides not only the highest possible indoor air quality, but also the occasional Marilyn Monroe moment.

This was a fascinating experience for TSA staff. We are all aware of TSA’s involvement on various projects, but hearing a first-hand account provided a much deeper understanding and appreciation of the work our people do. Barrack Place is an incredibly innovative building and Dan Jourdan’s commentary was passionate and insightful. Thanks Dan for taking the time to show us through Barrack Place – we look forward to the next guided tour!

Kelly Laurantus is a member of TSA’s Sydney based Marketing Team. 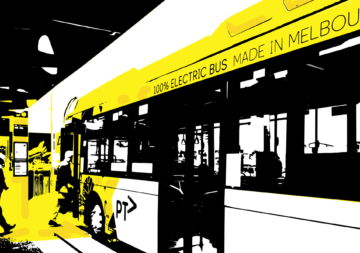 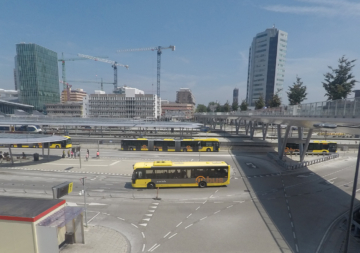 As easy as A to ZEB? Finding the path to zero emission buses on the way to net-zero 2050